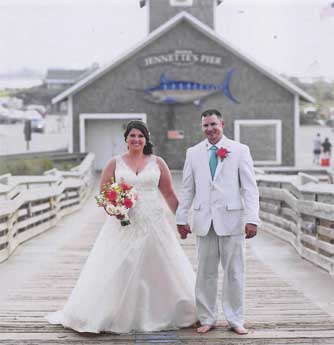 The bride was escorted by her father and given in marriage by her parents. She wore a light gold/caramel Sincerity by Justin Alexander gown adorned with lace appliqués on soft tulle. The bodice of her gown featured an A-line silhouette with beaded lace appliqués and tulle straps that dropped into a V-neckline. The back of her gown had an illusion back with covered buttons that flowed into a chapel length train. She wore a comb embellished with crystals, rhinestones, and light gold flowers in her hair. She carried a hand-tied bouquet of cream and coral garden roses, limelight hydrangeas, coral and peach Gerber daises and succulents. Small brooches from both of the bride’s late grandmothers were affixed to the ribbon of her bouquet.

David Schmidt was his brother-in-law’s best man. Groomsman was Travis Jones, brother-in-law of the bride. Lane Cristo, son of the groom, was the ring bearer. All of the men in the wedding party wore tan suits with a coral Gerber daisy boutonniere and the groom’s gift of a sea foam green Vineyard Vines tie with tiny angel fish.

A rehearsal dinner hosted by Mr. and Mrs. Hamlett was held for the wedding party and family the night before the wedding at the Casino Ridge beach house.

Following the beach ceremony under a canopy featuring cream and coral garden roses, limelight hydrangeas, coral and peach Gerber daises, a cocktail hour was held on the deck of Jennette’s Pier overlooking the Atlantic Ocean.  Dinner was enjoyed in the ballroom followed by dancing to the live music of The Crowd.
The bride is a graduate of Longwood University where she earned a Bachelor’s Degree in Business Administration with concentrations in Management and Marketing. She is employed with Charlotte County Social Services.

The groom is a graduate of Averett University, with a Bachelor’s Degree in Physical Education. He is employed with Green Front Furniture in Farmville.

Following a honeymoon to Ocracoke Island, the Cristo family resides in Prospect.