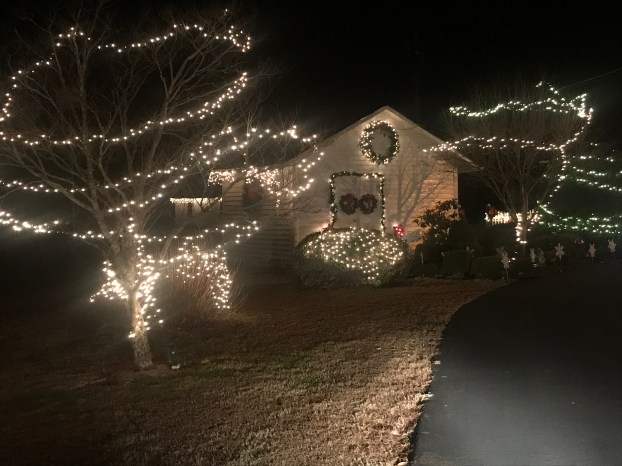 Drakes Branch Resident Nellie Garnett has been decorating her home with significant holiday displays for more than 10 years. Garnett’s holiday display spans the length of her circle driveway to create a drive-thru experience.

Drakes Branch resident Nellie Garnett has been creating her own winter wonderland in town for more than 10 years.

Located on Proctor Street, Garnett’s home lights up the street at night with an assortment of holiday lights in the perfect setting.

“I’ve just been doing this a long time,” said Garnett. “I stretch it a little bit each year.”

Garnett said after her daughter passed away in 2010, she gained even more motivation to keep putting up her colorful displays.

“She always wanted me to do my Christmas lights,” said Garnett. “I think about her a lot.”

When asked how long it usually takes her to create the masterpiece, she said she doesn’t start putting up any decorations until after Thanksgiving has passed.

When asked if she typically follows a special theme or color scheme for her decorations, Garnett said, “I just love to mix it up.” She said whatever she sees that she likes is what she will put up that year.

After the holidays have gone by, Garnett said the display is turned off until next year.

“I don’t carry them beyond New Year’s Day,” she said.

Garnett’s decorating skills have not gone unnoticed throughout the town and even by visitors who come to Drakes Branch.

She said while the decorations are on display, several individuals will ride by to catch a glimpse of the lights, and those who visit the Drakes Branch Music Hall from out of town will even stop by to see the colorful arrangements.

“I appreciate people telling me they enjoy it,” she said.

The new Charlotte County Courthouse continues to progress with a projected completion date set for the end of January 2018.... read more