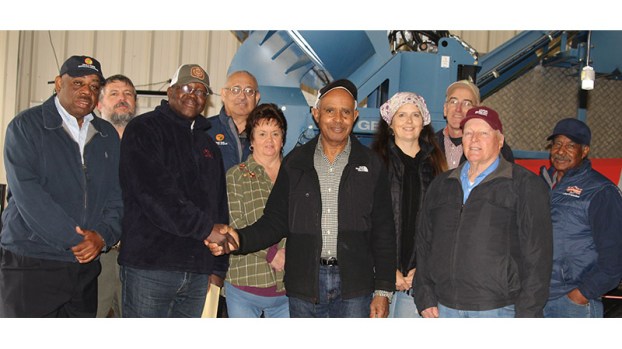 With the handing over of equipment and facilities worth more than $200,000 Wednesday, Feb. 26, to the Southside Virginia Fruit and Vegetable Producers Association (SVFVPA), one of the longest-running projects supported by grants from the Virginia Tobacco Region Revitalization Commission in Charlotte County has come to a close.

According to Charlotte County Extension Agent Joanne Jones, SVFVPA was created so growers could sell their produce to larger buyers.

“The association was established to promote commercial fruit and vegetable production in the Southside through pooling of resources and aggregation of produce to achieve economies of scale,” Jones said.

Between 2013 and 2020, Virginia State University (VSU) has worked with farmers in Southside Virginia to promote production, processing, and marketing of vegetable soybean, commonly known as edamame.

The equipment transferred by VSU to the SVFVPA included two ASA-Lift GB1000 green bean harvesters and an assortment of other equipment, including a walk-behind edamame harvester, four stationery bean threshers, a produce sorting line, a produce washer, and a produce drier.

Producers who are interested in joining the SVFVPA can visit www.southsideproducers.com.