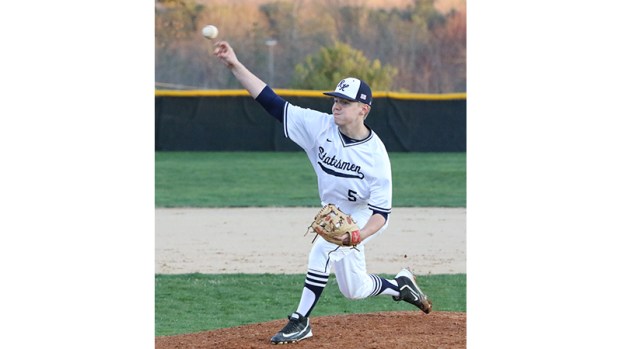 Due to the coronavirus pandemic, Randolph-Henry High School’s Colby Jordan missed out on the opportunity to be one of the go-to options on the mound for the Statesmen as a senior this year, but his playing days will continue in college at Chowan University. (Photo by Titus Mohler)

Colby Jordan has a collegiate baseball career ahead of him, but he was poised for one last run with Randolph-Henry High School’s varsity baseball team this past spring.

He was also planning to have a collection of in-game experiences on the mound that would help him further hone his pitching skills.

“I was trying to work on building my velocity up and pitching more out of the stretch than from the wind-up,” he said.

But the COVID-19 pandemic stopped the 2020 high school season before it even really started, essentially canceling Jordan’s spring plans.

“It was tough,” he said. “It left me with nothing to do a lot of times, so I had to figure out how to get better through it.”

Reflecting on what Jordan brought to the Randolph-Henry baseball program during his time with it, Statesmen Head Coach Josh Barmoy relished Jordan’s steadiness as a pitcher.

After two years on the junior varsity squad, Jordan made his debut on the varsity team as a junior in 2019 and ended up earning First Team All-James River District (JRD) and Second Team All-Region 2A honors at the pitcher position.

“If I’m not mistaken, he was under a 1.00 ERA through the regular season,” Barmoy said.

The coach said Jordan threw strikes and allowed Statesmen in the field to make plays.

“(He) doesn’t say a whole lot, but he’s confident in what he does and very knowledgeable of the game, and I’ve just seen a lot of growth since his freshman year as far as personality and just the joy for the game,” Barmoy said. “And (I’m) just real happy for him and his family and being able to help him in that process of getting to Chowan (University) and being able to play next year, hopefully, in Murfreesboro, (North Carolina).”

Jordan noted Monday, July 13, it is still uncertain whether or not there will be any fall athletic activities for him to participate in with Chowan.

“He throws the change-up probably the best that I’ve ever seen it at the high school level and can throw it in any count, can locate it,” Barmoy said. “It’s his best pitch, and I know that he’s going to have a lot of success in the college ranks just with that pitch.”

Jordan has a good bit of time for improvement as well, the coach said.

“He’s not a huge kid, by physique, and I think him getting in the weight room and maybe getting a little more serious in his diet, I think he can get a little stronger and be able to throw the ball a little bit harder and be able to just solely focus on baseball and academics,” Barmoy said. “I think that’s going to really elevate his talent. I think there’s going to be some better things that are going to come out of that if he works really hard.”

When Jordan was not pitching for the Statesmen, he was a third baseman and showed impressive ability at that position, Barmoy said.

Pondering the lost 2020 season, Jordan said a goal he had set for the year was to get past the regional semifinal game, which is where multiple Statesmen seasons have ended in recent years.

What Jordan said he missed the most about the season were the bus rides to and from the games that provided an opportunity to bond with teammates and discuss what happened on the field.

“I ride the bus back every away game,” he said.

Randolph-Henry High School’s Matthew Harding had already signed on the dotted line in November 2019 to play baseball at the... read more