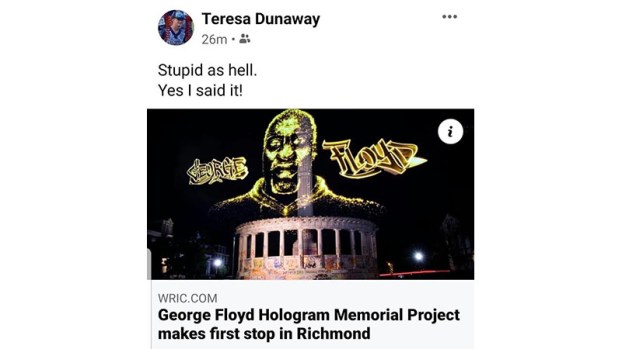 This is the comment on Charlotte County School Board member Teresa Dunaway's personal Facebook page that is the subject of a 10 a.m. Friday protest at the school board office.

Following a Facebook post by an elected Charlotte County School Board member, a protest has been scheduled for Friday, July 31, at 10 a.m. at the school board office by citizens who say the member should be removed or resign her position.

School Board member Teresa Dunaway shared a post on her Facebook page Tuesday, July 28, about the George Floyd Hologram Memorial Project making its first stop in Richmond. In doing so, Dunaway made a comment that several citizens and educators say was racist.

The post by Dunaway on the news story about the event said, “Stupid as hell. Yes I said it!”

Both School Superintendent Robbie Mason and School Board Chairperson Gloria Talbott declined to comment on the issue.

“The things I post on my page are my opinions only. They are not my family, in-laws, friends, or neighbors. They do not speak for me, and they are not responsible for what I post. It is just my opinion.”

On Thursday afternoon when messaged on Facebook, Dunaway said her comment was “in no way racial” and that her choice of words may have made some people mad she does feel that she is entitled to her own opinion.

Dunaway further said, “I said why not have memorials for all the murdered. Especially the innocent little children who now have no life. Where is their justice? That is all. I would have posted the same thing if it was about a red, blue, green, white, or purple man.

“Why just single out one person when so many have lost their lives to violence in the last few months. I think they all need justice and memorials too.”

Randolph-Henry High School educator Monique Williams said the post was sent to her from a concerned parent.

“I am growing very tired and weary of having to keep having these discussions, especially considering the education and government setting,” Williams said. “As a member of our community who is black and an educator, this just makes me question leadership significantly. The insensitivity and lack of decorum are alarming. Her behavior and comments are inappropriate, and the fact that she does not believe she is behaving inappropriately indicates that no amount of sensitivity training will fix the problem. We need accountability and progressive discipline or termination.”