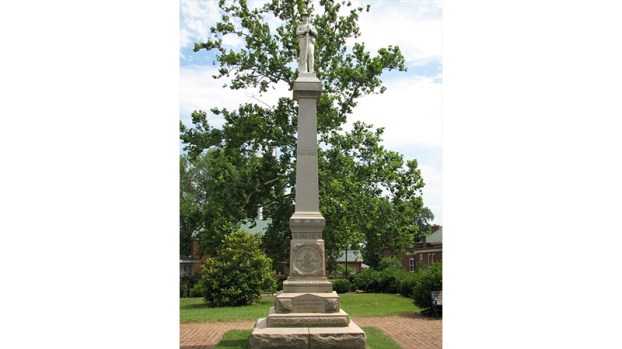 The Confederate Memorial monument located in the courthouse square has become a topic of discussion for the county’s Board of Supervisors.

Despite several citizens having expressed their concerns about a Confederate statue that sits atop a pedestal in the courthouse square and if it should or should not remain there, the Charlotte County Board of Supervisors (BOS) have decided not to make a decision on the matter in hopes that “things will cool down” and possibly hold a public hearing at some point after the beginning of 2021.

The Confederate statue issue, which has faced many localities around the nation, was brought to Charlotte County’s forefront in July when citizen James Morton wrote a letter to the BOS.

“I think it is of utmost importance to remove the Charlotte County Confederate Monument,” the letter from Morton said.

Morton said the issue was about government-sanctioned honoring of Confederate soldiers and not about erasing or hiding history.

Discussion of the Confederate statue was on the BOS agenda for its Monday, Aug 10, meeting, but little talk among the board was held. However, during the public comment period of the meeting, several citizens once again expressed their concerns both for and against the monument.

“I would encourage you to let the citizens of Charlotte County vote on this issue,” Ned Locke, Jr. said. “If the law allows, get it on the ballot for the Nov 3 election. There are many strong opinions on the subject among local citizens. A vote would give everyone a voice in the decision. It would also put an end to various factions trying to claim that everyone feels the same way that they do.”

Sonya Carwile said she was thankful to live in a time and place where monuments may be retired by thoughtful consideration rather than removed by angry mobs.

“In no way do I support those who unlawfully destroy monuments,” she said. “We do not need memorials in Charlotte County that divide us and serve as painful reminders to some. Simply put, Confederate memorial are divisive. What we do need is a government that not only represents all people by one that carefully balances the needs of all people. I believe the majority in Charlotte County values unity in the community more than memorializing anything.”

On Jul 1, new legislation took effect, giving cities and counties around Virginia the power to remove Confederate monuments they own and maintain under the new law.

In July, the BOS had planned to create a committee made up of individuals from various community organizations to discuss the issue with the expectation they would make a recommendation to the board. The committee never originated.

Following a Facebook post by an elected Charlotte County School Board member, a peaceful protest was held in front of... read more