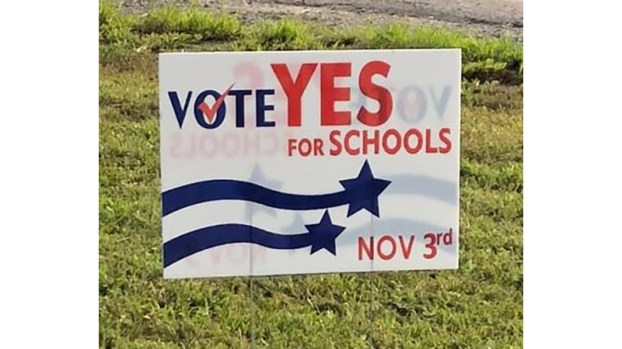 Vote Yes signs like pictured above have been placed throughout the county to inform citizens of the campaign to vote for a 1% sales tax increase on the Nov. 3 ballot to help fund school projects.

A committee has been formed in an effort to inform county citizens of the 1% sales tax referendum on the ballot to provide funds for school maintenance and renovation projects.

The committee made up of school and county officials, and citizens are working on a donation of $2,500 and volunteer hours to help spread the word that a yes vote on the Nov. 3 ballot will provide funds for school construction while possibly keeping taxes from rising.

Charlotte County School Superintendent and committee member Robbie Mason said he hoped citizens would understand the need when they go to the polls in just a few weeks.

“There is a desperate need for school renovations in Charlotte County,” Mason said. “A 1-cent on the dollar increase in the sales tax would provide the school board with guaranteed funds annually to repair and renovate areas of need within our schools, especially our older schools like RHHS. For that reason, I am very supportive of the sales tax referendum, and I hope that our citizens will be supportive, as well.”

The Charlotte County Board of Supervisors (BOS) unanimously voted during its Jan. 8 meeting to adopt a resolution in support of a 1% sales tax increase.

The BOS requested that Del. James Edmunds introduce legislation giving the county the authority to place a referendum on the November ballot.

If citizens vote yes on the referendum, the BOS would then adopt a resolution to add the 1% sales tax beginning July 2021.

“The taxpayers will have the final say,” County Administrator Dan Witt said. “If they say no then the board has some tough decisions to make.”

Witt further said the 1% tax to help fund school projects would go away once the debt service is paid off or once the projects are completed.

“To be clear, as county administrator, it’s not my job to tell voters how to vote, but to provide the facts that allow each voter to make an informed and educated vote,” Witt said.

“A 1% sales tax is equivalent to 1 cent on each dollar spent on certain retail items, not including food purchased for human consumption or essential personal hygiene products. Some might say, ‘it’s just a penny,’ but in reality, it means an estimated $300,000 annually to improve and maintain the schools that approximately 1,770 children in our community attend each school year.”

Over the past two weeks, signs that say, “Vote Yes,” have begun to appear all over the county. Committee members have placed the signs trying to let citizens know about the issue.

“We have been able to order 220 signs from three citizens’ donations,” Supervisor Kay Pierantoni, who serves on the committee, said. “We hope to order seven large signs with more funds from an existing donor and funds from another new donor.  In total, we will have less than $2,500 to spend but keeping real estate taxes as low as possible and improved school buildings (not just test scores) are both vital to economic development efforts.”

The Charlotte County Board of Supervisors recognized Nan Lambert, the county’s longest-serving general registrar and director of elections of 33... read more