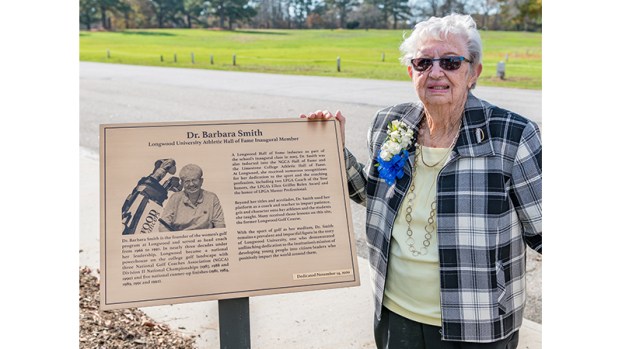 With a resumé that includes three National Golf Coaches Association (NGCA) Division II National Championships, five national runner-up finishes, enshrinement in the Longwood Athletics Hall of Fame, NGCA Hall of Fame and Limestone College Athletic Hall of Fame, and two LPGA Coach of the Year honors, her list of accomplishments is overshadowed only by her enduring legacy at Longwood University.

Now the acreage where Smith forged the Longwood women’s golf program into a national powerhouse will further bear her legacy in the form of a commemorative plaque that the university unveiled Saturday afternoon, Nov. 14, at the former Longwood Golf Course.

The plaque will remain a permanent fixture adjacent to the course, where Longwood’s Division I women’s and men’s golf teams still train today nearly 30 years after her retirement in 1992.

“Dr. Smith’s name is synonymous with Longwood,” Meadows said, now in her third year as Longwood athletics director and 15th as a member of the athletics administration.

“Her accomplishments as a coach speak for themselves, though no plaque would ever be big enough to list them all. But for all her championships, the All-Americans she coached and the records her teams broke, her most lasting legacy is the impact she had on the hundreds of former students and student-athletes she coached and taught. Her gifts as an educator are matched only by her genuine desire to inspire the best in young people. The game of golf was simply her medium to do that.”

Speaking to the impact Smith had on those golfers and students under her tutelage, a collection of former players led by the four-time All-American Hirst fundraised for the plaque to honor their head coach. Hirst, who led Longwood to two NGCA National Championships in 1993 and 1995, was also on hand to speak to the crowd and Smith’s impact on her career as a professional golfer and life overall.

“All the core values you go through life with, that is Dr. Smith,” Hirst said. “That’s what she gave us as college players. She lived those values, so we were able to see that in action. Coming to college is a pivotal time of your life, so to have that as a coaching philosophy, it was important.”

Smith’s plaque is the second installed by Longwood within the past four years honoring the early pioneers of Lancer athletics. On Nov. 11, 2016, the university presented a similar tribute at the Longwood Athletics Complex honoring the late Dr. Elizabeth Burger Jackson, who, like Smith, made a decades-long impact as a faculty member and driver of Longwood athletics. Their two monuments now sit just 100 yards from each other across Johnston Drive, which intersects the longtime hub of several of Longwood’s Division I athletics programs.

Hampden-Sydney College (H-SC) senior offensive lineman Tyler Howerton has been named one of 12 finalists for the 2020 William V.... read more