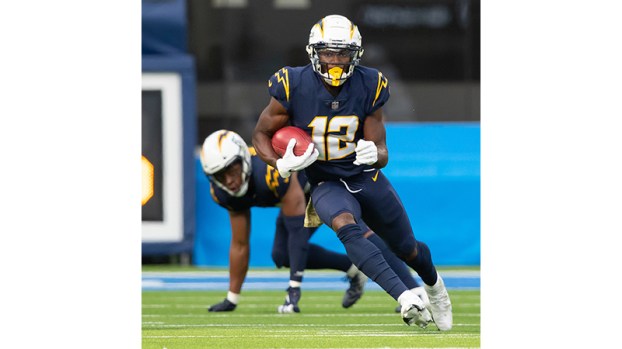 Former Randolph-Henry High School and University of Virginia football standout Joe Reed is more than halfway through his first season in the NFL, and is experiencing the blessing of being able to enjoy his work.

Speaking on Wednesday, Nov. 18, nine games into the season for the Los Angeles Chargers, Reed shared how he was feeling about the experience.

A major highlight for Reed and his young NFL career came in Week 7, Sunday, Oct. 25, when the Chargers were hosting the Jacksonville Jaguars.

During a Chargers drive that had advanced to the Jaguars’ 7-yard line, Reed was sprinting to the right, pre-snap. He took the handoff from rookie quarterback Justin Herbert without breaking stride and curled around the right side. The pathway to the end zone was not obvious at first, but he broke a tackle and then burst forward between two Jacksonville defenders to score his first NFL touchdown with five seconds remaining in the first quarter.

Reed reflected on what that landmark achievement meant to him.

“It was a dream come true — a surreal moment, for sure. (I’m) just happy to be out there, being able to make that play and really just keep it going,” he said.

Reed confirmed that he did not know early on in the 7-yard run that he was going to get the angle to be able to score.

“The only thing I know is when I broke the huddle, I told myself, whatever I had to do to get in, take advantage of the opportunity that the coaches gave me, that I was going to make sure I willed my way into the end zone,” he said. “So at first, it was a little blurry in there, but I can break a couple tackles, and that’s what I did.”

Reed has been active in eight of the Chargers’ 10 games thus far. He has 17 kickoff returns for 376 yards, with his longest return being his first one, when he went for 46 yards. He has five carries for 29 yards and a touchdown, good for a 5.8-yards-per-carry average. He has been targeted once in the passing game, and he has also logged two total tackles.

He shared the goals he has set for himself for the second half of the season.

“Right now, for me, it’s just, like I said earlier, just taking full advantage of any opportunity that I’m given, especially as a rookie, being out there and playing and being able to put myself in a position where I can have them trust me and earn the trust of coaches,” he said. “So my biggest goal right now is just to keep pressing forward and being able to earn that trust.”

For outstanding, high-profile examples to follow, he need look no further than the L.A. Chargers’ roster.

“I’m in the receiving room with Keenan Allen and Mike Williams every day, so I’m lucky to be in that situation,” he said.

In addition to sharing the field with household names, Reed has also been presented with other fun realities of life in the NFL. One of those is now being an official character in the highly popular Madden NFL video game franchise.

However, Reed noted he has not played as himself in Madden NFL 21 yet for a simple reason.

“I do not play video games,” he said with a laugh. “Yeah, so I don’t play the game, so I have not had that experience, but I’ve had friends send me Snapchats and videos of myself.”

He affirmed it was incredible to see himself rendered in such a massively popular video game.

“And the graphics are so real and the movements look so real, and to just see myself on there is just simply awesome,” he said.

Due in part to the COVID-19 pandemic, Reed’s earliest return to Charlotte County will have to wait until the end of the Chargers’ season.

“I’ll be here for the rest of the season, because we have to COVID test every day, so even during our bye week, I wasn’t able to leave,” he said. “So I’ll just be in California until our last game.”