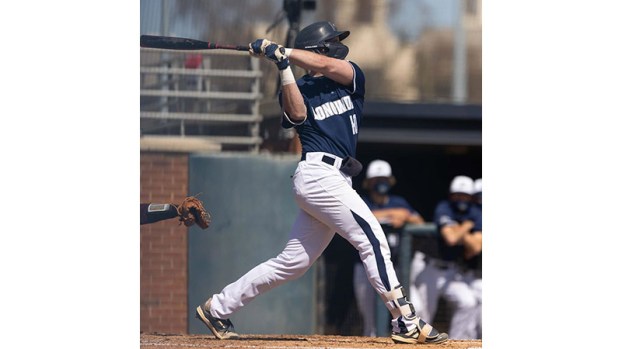 Freshman James Nelson had a monster day at the plate with seven hits, including his first collegiate home run, and five runs batted in during the doubleheader. (Photo by Mike Kropf/LU)

James Nelson and the rest of Longwood baseball’s young guns showed up and showed out to help the Lancers salvage a doubleheader split against High Point Saturday at Buddy Bolding Stadium.

Nelson ripped off seven hits and drove in five runs in the two games. He banged out a pair of doubles, hit his first collegiate home run, and drove in both the tying and go-ahead runs in game two.

“I just stayed locked in and built off of yesterday,” Nelson said. “I had a couple good swings yesterday, and I just made sure to stay on time, made sure I’m seeing the ball really well. Once I got that first hit today, it got me going, and I just kept rolling.

The freshmen drove in six of the team’s eight runs in the game two win while going 8-19 combined at the plate. Keondre Shelton, Michael Dolberry and Eliot Dix all had timely swings in big spots in addition to Nelson’s monster day.

On the mound, freshman pitchers Dylan Saale and Logan Berrier excelled in the win, with the two combining for nine innings of one-run ball. The duo quieted a High Point offense that had totaled 29 hits and 23 runs in the first two games of the series.

“It was a must win,” Longwood head coach Ryan Mau said. “We had to salvage a game in this series, and I thought the guys showed a lot of fight after that first game, to come back and fight the way we did. A lot of young guys really grew up today, which is always great to see.”

A six-run surge in the first inning paved the way for High Point to cruise in game one. Freshman Peyton Carr and Cole Singsank drove in seven runs on five hits between them. Carr tied a career high with four RBI and added three runs, and Singsank drove in three while scoring twice.

For Longwood, Nelson, Dillon Champagne and Cullan Wadsworth totaled seven of the team›s nine hits. Nelson posted his first three-hit day as a Lancer, driving in a run and also scoring once. Champagne and Wadsworth each added two hits apiece.

The High Point pitching staff managed to limit the damage though, keeping Longwood from posting a big inning. Redshirt-freshman starter CJ Neese (1-0) earned the win on the mound for High Point in his first collegiate start. He pitched into the sixth inning while working around four hits. He gave up two runs, one earned, with three strikeouts by keeping Longwood from stringing together a big inning.

In the first inning, High Point loaded the bases with nobody out and batted around, sending six runs home to take an early lead. Singsank drove in two runs in the first, part of a 3-5 game at the plate. Carr added a two-run home run in the third, and High Point never looked back.

Nelson plated Champagne with an RBI double to get Longwood on the board in the fourth inning, but by that point the hole was too deep. Nelson went 3-4 for Longwood, and Champagne had his first multi-hit game of 2021, going 2-4 with a run and an RBI double in the game.

Lloyd Dominguez (2-1) took the loss for Longwood. The sophomore left-hander gave up five runs on two walks and two hits.

After going 3-4 in game one with an RBI and a run scored, Nelson one-upped himself in game two. He was a perfect 4-4 at the plate while driving in a career best four runs and scoring twice.

High Point had taken a 1-0 lead in the second inning, but Nelson answered in the bottom half of the frame by clobbering a solo homer into the trees over the right field wall. His first collegiate homer evened the score and came in his 24th at bat for Longwood this season.

“It was amazing,” Nelson said, describing his home run. “I kind of zoned out. It’s a great feeling, and especially your first one in college. A lot of work went into it.”

“Nelson is a freshman getting a lot of opportunities, and you’re seeing him adjust to the level very quickly,” Mau said. “Those were some big at bats, and obviously some big swings that we were in need of. He put a charge into us offensively.”

Nelson and the rest of his teammates were just getting started. Beginning in the fourth inning, Longwood scored in four straight innings to balloon the lead to 8-1.

In the fourth inning, Nelson smoked a liner to second for an RBI single to give Longwood a 2-1 lead. Shelton cranked a double down the left field line to score one more one batter later.

In the fifth, Dolberry rocketed his RBI single through the right side, and Drayven Kowalski sliced a run home with an RBI single in the sixth. Nelson capped the scoring with an RBI double down the right field line.

Meanwhile, Saale gave Longwood a gritty start in his first appearance since March 16 against High Point. The right-hander went 4.2 innings and only gave up one unearned run while working around four hits and three walks.

He got in a bit of a jam in the fifth and turned things over to Berrier (2-0). The relief ace came on with the bases loaded and two outs in a 1-1 game and escaped the trouble. The freshman then closed it out, tossing a career high 4.1 scoreless innings. He walked three and only gave up one hit to earn the win.

“Dylan coming off of an injury, on a limited pitch count today, gave us everything he had and did an outstanding job,” Mau said. “We’ve been needing a start like that, and it was great to see a freshman, again, step up for us into that role.”

“Logan did a great job of challenging hitters, getting weak contact and putting zeros up on the board. And he gave us more than we expected.”

Dawson Place (1-3) took the loss for High Point after surrendering three runs on five hits in 3.2 innings of work. He struck out three without issuing a walk.

“The win keeps us alive,” Nelson said. “It keeps us rolling so we can really build off that because you know, we lost the first two. But it really shows what type of team we’ve got. When we bear down, we’ve got the ability to start winning some more. Hopefully we can use this as momentum, because I felt like our energy was really good this game.