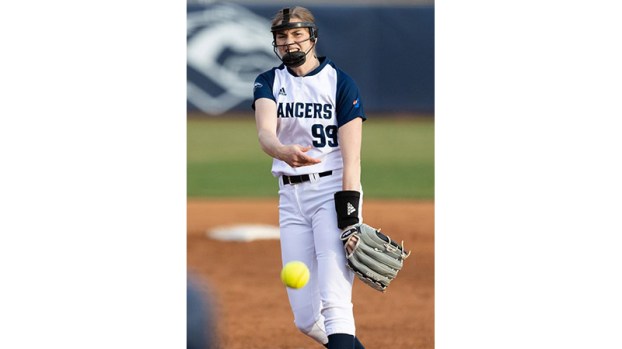 After perfect game, Backstrom named Pitcher of the Week

In the latest chapter of a 2021 season in which she has amassed a 16-9 record, a 2.74 ERA and held opposing hitters to .192 batting average, Backstrom threw Longwood’s first perfect game of the Division I era in a 7-0 win at rival Presbyterian and was the pitcher of record in all four of Longwood’s victories last week.

She went 4-0 with complete games in all four starts, as the Lancers (21-21, 10-5 Big South) won back-to-back Big South road series at Radford and Presbyterian. The 6-1 right-hander from Huntersville, North Carolina, struck out 31 batters and did not issue a single walk in her 28 innings, posting a 1.25 ERA and allowing just 11 hits all week.

Backstrom’s perfect game against Presbyterian in Longwood’s 7-0 series-opening win was nothing short of masterful, as she needed just 79 pitches to get through seven innings. She faced a three-ball count just once and got all nine of her strikeouts swinging. The perfect game was only the third by a Big South pitcher since 2004, the second no-hitter of Backstrom’s career, and her Big South-leading fourth shutout on the season.

That perfect game was one of four dominant performances during the week by Backstrom, whose four consecutive complete games were all seven-inning outings. In the opener against Radford, she held the Highlanders to five hits and two runs in a 10-2 win. She followed with a series-clinching performance in game three, scattering three runs on four hits in a 4-3 win.

In the perfect game against Presbyterian, she fanned nine to give the Lancers a 7-0 win and a 1-0 series lead. After Presbyterian rallied to win game two 3-0, she took the mound once more and took a no-hitter into the fifth inning. The lone run she allowed in the 4-1 victory was unearned, coming on a dropped fly ball that was Longwood’s lone error of the weekend. She allowed just two hits, struck out 10 and did not issue a walk in the win.

Backstrom, who ranks among the top three nationally in innings pitched (158.2) and complete games (19) and leads the Big South in wins, opponent batting average and saves, will take the circle once again this Wednesday in a doubleheader against commonwealth powerhouse James Madison at Lancer Field. That non-conference showdown will offer a tune-up for the Lancers’ ensuing Big South home series against Charleston Southern this Saturday and Sunday, April 24-25.