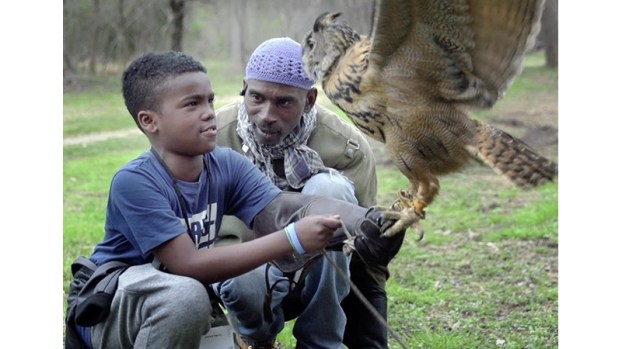 Rodney Stotts works with a youth teaching him how to care for one of his many birds.

Rodney Stotts, a Charlotte Court House resident, is one of only a handful of African American falconers in the country, and he is on a mission to build a bird sanctuary and provide access to nature for his community.

“We can all hurt people, but we can also help people, and I want to do the latter,” Stotts said.

This is a story of second chances — for injured birds of prey — for an abandoned plot of land — for a group of teenagers who have dropped out of high school — and for Stotts himself.

“All this is healing; all this is medicine. All this changes who you are,” Rodney Stotts said.

Armed with only a chainsaw, woodchipper and a weed eater, Stotts is working to turn seven areas of his property in Charlotte Court House into a bird sanctuary.

According to Stotts, he draws upon the participation of his community. Without money, he builds aviaries with donated wood.

Without staff, he calls on family, friends, and volunteers for help.

Stotts, a former prisoner in Washington D.C., said he was saved by his work in conservation and is now working to reach the next generation.

“Tragedy strikes everyone. It’s what you do with it that determines what you are going to with the rest of your life,” Stotts said.

Today, Stotts takes his birds to places he feels he can best reach those in need.

“I go everywhere with the birds,” he said. “I go into jails, schools I have worked with the police departments to reach people in need.”

Stotts’ love for conservation and helping others recently gained him exposure on a WORLD Channel documentary called “The Falconer.”

The film follows Stotts as he builds the Oak Hill sanctuary and gives an in-depth look into his life on the streets and how he has turned it around to help the next generation.

The documentary can be seen at https://worldchannel.org/episode/america-reframed-the-falconer/