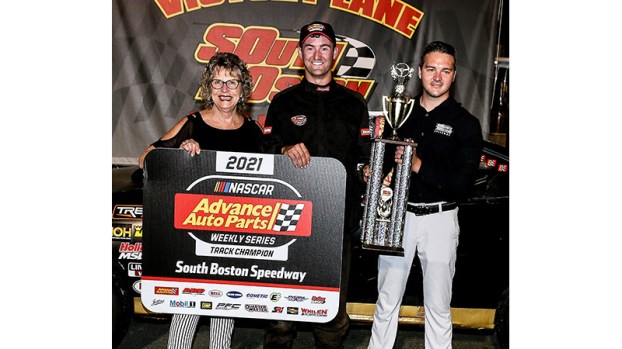 Saturday was a night of double celebration for Peyton Sellers at South Boston Speedway.

“To cap off a championship night with a win is unbelievable,” Sellers said after winning the race and scoring his 21st victory of the NASCAR national points season.

“To win four straight championships here at South Boston Speedway is something I am very proud of,” Sellers remarked.

There was no easy path to victory for Sellers in Saturday night’s 100-lap NASCAR Late Model Stock Car Division race. He led twice for a total of 65 laps, taking the lead from Jacob Borst of Elon, North Carolina on the 76th lap after muscling his way out of a tense four-car battle that followed the race’s final restart with 28 laps to go.

There were three lead changes between Sellers and Borst in the race that was slowed by four caution periods and one red flag.

In one of the closest championship points battles South Boston Speedway has had in its NASCAR Limited Sportsman Division, Daniel Moss of Danville won his first career NASCAR track championship, edging Jason Myers of Hurt, by a slim two-point margin for the title.

Entering Saturday’s 50-lap Limited Sportsman Division race, Moss held a narrow 13-point edge over Drew Dawson of Nathalie, and a 22-point margin over Myers, who had rallied up to third place in the points chase on the strength of three straight wins.

Moss got off to a good start in Saturday night’s race only to have his car start fading just past the midway point of the race. He hung on to finish seventh, but both Myers and Dawson finish ahead of him.

Eric Winslow of Pelham, North Carolina took the lead from Ryan Joyner of Lucama, North Carolina on the 14th lap and led the final 36 circuits to win the race and earn his third victory of the season at South Boston Speedway this season.

Winslow edged J.D. Eversole of North Chesterfield, by .403-second in taking the win with Myers, who started at the rear of the 15-car field, finishing third. Dawson finished fourth and Daniel Crews of Long Island, rounded out the top five finishers.

There were two lead changes in the race between Winslow and Joyner.

The Long Island, resident took the lead from teammate Daniel Shelton of Hurt, with three laps to go as the engine in Shelton’s car soured and won the 30-lap race and the 2021 South Boston Speedway Budweiser Pure Stock Division championship.

This marks the second straight Budweiser Pure Stock Division championship for Crews and the third straight title for his family-owned race team. Shelton won the title in 2018 driving Crews’ car.

Saturday night’s win was his 11th victory in 13 starts this season at South Boston Speedway. It was his fourth win in his last five starts. He edged runner-up Bruce Mayo of Halifax, by 5.867 seconds, with Shelton limping his ailing car home for a third-place finish. B.J. Reaves finished fourth in his Budweiser Pure Stock Division debut and Jimmy Wade of Halifax, rounded out the top five finishers.

It was Dawson’s first career NASCAR championship, with Dawson topping his cousin, Jared Dawson of Nathalie, for the title.

Josh Dawson started at the rear of the 11-car field and grabbed the lead from Andrea Ruotolo of South Boston, with two laps to go to take the victory. The win was Josh Dawson’s eighth victory in 10 starts this season at South Boston Speedway.

Ruotolo finished second in what was his best outing of the season. Former division champion Kevin Currin of Chase City, finished third with Kendall Milam of Keeling, and Jared Dawson of Nathalie, completing the top five finishers.

For the latest news and information about the speedway visit the South Boston Speedway website.