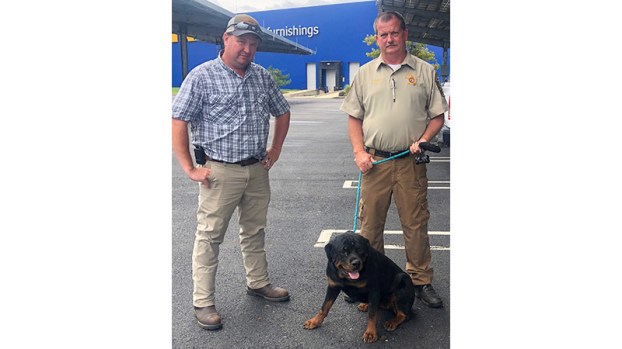 Animal Control Officers Ross Russell, left and Elwood Hamlet traveled out of state to find a forever home for a surrendered canine.

Sometimes the job of an animal control officer (ACO) has a happy ending.

For Charlotte County’s new animal control officers Elwood Hamlet and Ross Russell that day came recently when the two were able to find a home for a pet canine.

According to Assistant Director Francee Schuma with the Southside SPCA, the owner of a purebred Rottweiler contacted animal control wanting to surrender the dog after the canine allegedly got into a fight with another dog on her property.

“The ACO’s contacted me and unfortunately we were full, but I suggested they contact Shelia Estes, the ACO for Nottoway County who has many contacts with Rottweiler Rescues,” Schuma said.

Schuma says that call set the wheels in motion.

“Less than 24 hours later, a rescuer stepped up to take the dog … but the dog needed to be transported to Baltimore, Maryland.”

The next day Hamlet and Russell set off in a rainstorm to meet the dog’s new owner in Maryland.

“In the past, this type of effort and networking would have never been done,” Schuma said. “We should celebrate the effort put forth by these ACOs to save the dogs under their care.”